Currently there’s an exhibition in Chelsea entitled Coexistence featuring a heard of 100 Lantana elephants, which are on a global tour to show the work of the Betta Kurumba tribespeople who created these. Not only that the exhibition’s purpose is also to highlight the plight of the elephant too. Lantana Camara is an invasive weed which affects the elephants habitats thus the people of the Nilgiri deemed it was a good idea to use this weed (which has shoots a bit like bamboo) to build their sculptures from. The exhibition will be moving to Green Park, St. James and Berkeley Square, from 14th June 2021, thus there will be more opportunities to view the Lantana elephants in different London settings.

These elephants are currently on a tour of Britain and they were first exhibited at places like Bicester Village in May 2019 before venturing to locations such as Highgrove House in October 2020 and Waddesdon Manor in November 2020, thus they’ve slowly been making their way towards London!

You may wonder why there’s a train picture snucked away in the header image… read on and all will be revealed!

Some of the Lantana elephants seen in Pavillion Road to the rear of Sloane Square during May 2021.

One of the first images one will see upon visiting the elephants’ website – is this image below showing an adult and a young elephant trying to cross the railway tracks. In India elephants and railways are quite synonymous, though not for exactly the right reasons, and it frequently highlights the huge differences between animals and humans. Of course humans have given elephants a bad time, killing these wonderful animals for their tusks and tough skin, driving them out of the forests and the rest of it. Human life has little in favour with that of the elephants (nor barely any other animals for that matter) thus even to this day there are many conflicts and this alone jeopardises the elephants existence.

In terms of the Indian Railways main lines, there’s many debates about the presence of elephants on or near railway lines. Some drivers however will in fact stop for these and let herds cross the tracks in safety such as this You Tube video of a herd of elephants in Bengal crossing the tracks in safety as the train driver waits. Other animals too are a problem including cows and oxen, but let’s not forget that countless people also walk the railway tracks in India and sadly there’s many fatalities too.

This is what the new exhibition is about – coexistence – a means of highlighting how humans and these mighty fine animals can live together. It is of course why Britain is currently hosting a series of exhibitions featuring these wonderful sculptures made from bamboo, and which originate from the Nilgiri Mountains in India.

When I mention the Nilgiri Mountains those who like railways might realise the connotations I’m making when a picture of a famous mountain railway train is included as part of the feature image for this post… Yes you’d be right its something to do with the Nilgiri Mountain Railway!

Let’s be straight about this there’s actually little in the way of conflict between the elephants and the mountain railway – its because both lead a peaceful existence, taking things quite slowly to say the least and railway staff have been instructed to treat the elephants along the line with care.

As we have already seen, these Lantana elephants come from the Nilgiri Mountains whish is also home to India’s one and only mountain rack operated line. Thus we head to the Nilgiri mountains to see elephants about the railway itself. Of course this being a mountain railway, it doesn’t go that fast and lots of other animals too besides elephants, such as Tahrs and Ibex, and macaque monkeys can regularly be seen on the steep rack climbing sections of the line. This You Tube video shows monkeys at Hillgrove. Its said the monkeys know the times the trains arrive and they are always there ready for when it does arrive and are able to receive the food the tourists and passengers regularly give out.

The Nilgiri Mountain Railway in fact provides a quite safe route for the elephants and railway staff have been taught to respect these animals. ‘Our staff always treat them with utmost care and concern, and provide all needs like water, etc’ says the area’s District Railway Manager.

The mountain railway’s rack locomotive Nilgiri Queen. This is the newest engine in the fleet, having been built in 2013. Its somewhat bigger than the largest elephants of course. The elephants still have to be respected however. Source: Twitter

Sadly those living in the mountains haven’t always treated the elephants with respect like this horrific incident quite recently where an elephant was fire bombed and burnt to death. There’s conflicts because the elephants have a protected route through the mountains, the Indian Supreme Court has decreed in the eyes of the law ‘the elephant is a gentleman and man should give way for the elephant‘ but sadly their presence doesn’t always sit well with the humans.

The natives who have lived here for centuries do however respect the elephants and make room for these animals. Unfortunately there is conflict between NGOs and what the natives deem is the best ways to manage the elephants – and the authorities want to see people moved out so that the elephants can use their protected corridors freely. In a nutshell there’s conflicts on all sides of the coin as each has their own philosophy as to how elephants should be able to live in peace and humans in peace with them too.

Some may have seen the BBC’s Indian Hill Railways documentary – the second episode of the series featured the Nilgiri line and the elephants it encounters. The programme took a good look at the animals and how they favour the railway – and this is because its often a lifeline for them. Indeed the tracks and the tunnels of the mountain railway provide a safe haven for the elephants.

A pair of elephants walking the Nilgiri tracks. This rock face section of line is what the railway staff call a ‘half tunnel!’ Source: Facebook

The same location on Google Street View which covers the entire route between Mettupalayam and Coonoor. Strangely the entire 46 km (28 miles) to Udhagamandalam isn’t covered as Google misses out a long section north of Coonoor, the railway’s headquarters and where all the locomotives and rolling stock are maintained. The trail picks up again at Aruvankadu for the remainder of the line to Udhagamandalam (also known as Ooty.) Anyway from the Google street view it will be noticed the half tunnel is painted white. Its likely to help train crew pick out the elephants better especially if it is dark. Similarly all the tunnels on the railway are whitewashed for the same reason.

Herd of elephants near Hillgrove on the Nilgiri Mountain railway. Screencap from the BBC’s Indian Hill Railways series.

Elephants on the platform at Hillgrove station. Screencap from the BBC’s Indian Hill Railways series.

An elephant takes a rest by the water tower at Hillgrove station. Pic source: Twitter

Hillgrove is the midway point on the rack section in a quiet part of the mountains. The station is frequented by many types of animal especially monkeys. Its said the elephants avail themselves of water at Hillgrove they know how to turn on the valves and quench themselves or even have a shower! Here’s Hillgrove station on Google Street View.

Its been said these elephants will shelter in the tunnels away from rain and even sleep in these at night.

One of a heard of elephants seen by the Nilgiri Mountain railway tracks. Source: Twitter 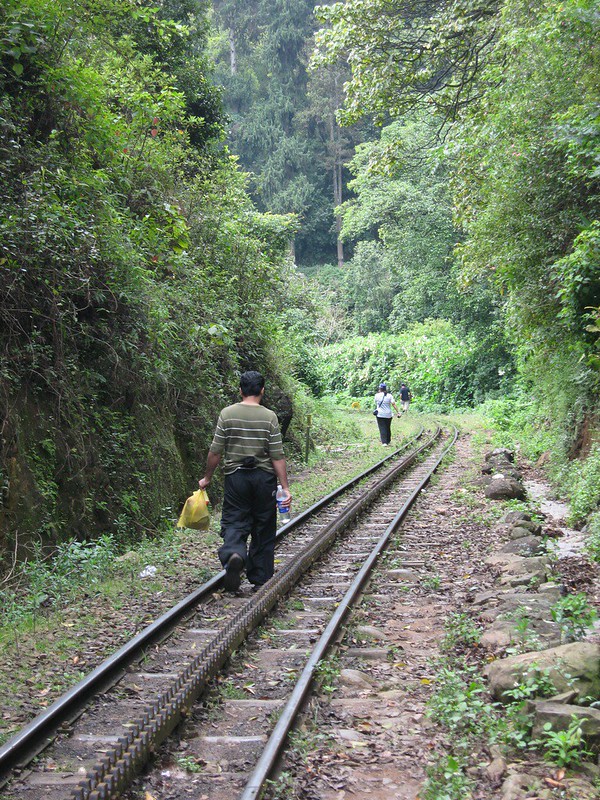 If the humans can do it, so can the elephants, they never forget! Source: Flickr

Here’s how the Nilgiris tribals contribute towards elephant conservation – The Hindu.

Jun 10, 2021
Subscribe
Login
0 Comments
Inline Feedbacks
View all comments
We use cookies on our website to give you the most relevant experience by remembering your preferences and repeat visits. By clicking “Accept”, you consent to the use of ALL the cookies.
Cookie settingsACCEPT
Manage consent