Along the Milwaukee Road #4

This is the fourth part of the Milwaukee’s electrified Rockies route through Montana towards Eastern Idaho. Many questioned the choice of route especially as it served few places and paralleled other railroads. Compared to the other railroads’ attempts through this part of the States the Milwaukee’s route involved the traverse of two additional mountain ranges! One of these are the Bitterroots through which the line’s St. Paul Pass traverses. These are covered in huge forests which must have made the surveying and construction of the line a nightmare – but what remains is a spectacular trail for people to enjoy.

But first this mystery picture! Its part of the John W. Barriger III National Railroad Library and shows the Milwaukee Road from a train descending presumably towards St Regis. Its said on Flickr this could be Drexel however the mountains in that part dont have these shapes. It could be Bryson (3801 ft) as there was a loop there according to track profiles. The other thing is the image is reversed (the number on the Boxcab is the wrong way round!) 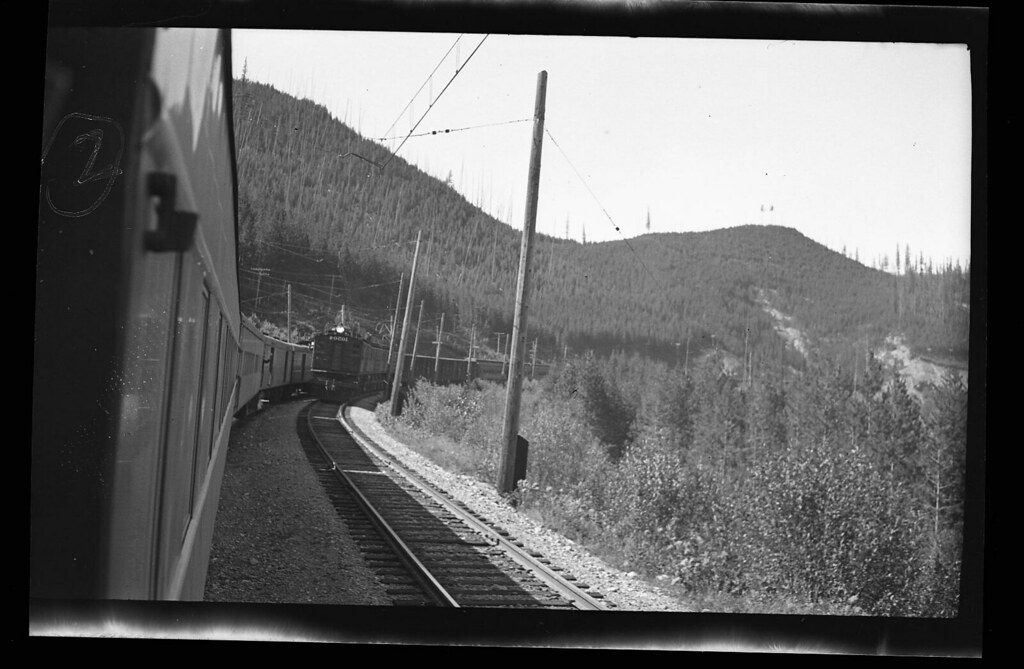 The route through the Bitterroot mountains which most know as the spectacular St Paul pass (and which features the latter part of this post) was one of those extra mountain ranges the line chose to cross (instead of simply heading straight for the Pacific unlike the Northern Pacific Railroad) and of course this proved a penalty in terms of transit times as well as additional tunnels, trestles, severe gradients etc.

The section from St Regis over the Bitterroot mountains is a special one. It was most celebrated in Milwaukee days and today it is possibly even more venerated now its a tourist right of way…

The Milwaukee’s St Paul pass route a celebrated and scenic route – one that has been retained for leisure use. Source: Ride the Hiawatha

The first bit was the conversion of the East Portal to Pearson section (the most scenic bit) for bike and walking use. The St Regis to Portal section is for vehicles, bikes walkers.

The nine miles from Pearson to Loop Creek is now a single lane highway. The 13 miles onward from Loop Creek to Avery is now a two lane highway. The section from St Regis was converted just a few years ago (when settlements over the ownership of the trestle at Saltese were settled and repairs to this and at Dominion could be effected.)

What it means is the first part from St. Regis to almost the St Paul pass tunnel is open to cars, bikes, and walkers. This is known as the Olympian Trail whilst the next bit from East Portal to Pearson is known as the Hiawatha trail (these trails bearing the names of two of the line’s famous expresses) and is open to bikes and walkers only. The remainder to Avery is Forest Highway 50.

The Hiawatha Trail from Taft to Pearson. Source: Mobile Maplets

Signalling of the Milwaukee Road over the St Paul Pass

Compared to the remainder of the 440 mile electric section of the line, that over the St. Paul pass was manually controlled. Here’s the story and the background to it. Many of the signals installed for the 1915 electrification were colour light automatic signals and this allowed the control of trains to be largely automatic. It simply meant if a train arrived at a station (or a loop) this being the start of the next block section – and the section ahead was not in use the signals cleared to allow it to proceed. This meant no train could proceed the other way until the first had left the section completely. There were signals roughly every mile or so along the railroad between stations or loops. Most were three aspect though some were two.

There were various mechanisms for ensuring a signal could only show one aspect at any time and the detection of trains was by means track circuits and impedance bonds (of various types depending on the road ahead eg switches, loops, a new block section etc) protected the ends of the various track circuits. One of the first sections to be installed as such was that from Piedmont to Butte, a distance of 35 miles and meant the line over the Pinestone Pass was largely automatically controlled. Other sections followed in due course. The equipment was provided by the Union Switch and Signal Company.

A pair of Little Joes with a westbound freight at East Portal in 1967. Source: Twitter

The project as completed would allow the 877 miles from Harlowton to Tacoma/Seattle to be covered by this new system. However the only part of the line not to receive the new installation was the section across St Pauls’ Pass. I am not sure where the manually controlled section began, it may have been from Saltese upward. In later days most of the section down to Pearson was controlled from East Portal station. The reason for this being the numerous tunnels and viaducts and very steep grades apparently prompted the idea it was safer to use the existing staff system thus the St. Paul’s pass was manually signalled right up to closure 1980.

From above Saltese the trestle bridges over the St Paul Pass are extremely high structures and were very difficult to construct. One innovation in the construction of these was to use a temporary inclined railway up either side of the valley along the works sites. This allowed engineers to build the trestles much faster than normal because concrete and steel could be delivered to the work sites in double quick time by use of these rope worked inclines.

These trestles needed their decking rebuilt completely in order to be safe for public use. The en route tunnels too needed to be safe – just one of these was not restored to use because of its dangerous condition. The picture below shows the first of the really high trestles – at Dominion Creek. As can be seen the entire decking had to be stripped and renewed because it wasnt very safe. The old timbers had rotted and holes were present giving an excellent view down to the bottom of the valley some 250 feet below!

The tunnel at Dominion is the last one (or the first) on the section through Montana. Its the only tunnel entirely in Montana too on the St Paul pass section. The St. Paul pass tunnel itself runs from Montana across into Idaho.

Today this is generally known as the Hiawatha Trail – named as one of the top ten Rails to Trails in the States by USA Today – and far more people now see the former Milwaukee route across the Bitterroot mountains in all its glory than when trains were the order of the day!

The eastern entrance to the long tunnel under the mountains is where people can hire bikes for the fifteen mile journey to Pearson.

View of the railroad’s route north east of the St Paul Tunnel. This area was once known as Taft! In railroad days it was the site of East Portal station – from which a substantial part of the St. Paul’s Pass route was controlled manually instead of automatic signalling. Google Streets.

The shanty town known as Taft near the entrance to the St. Paul’s tunnel. Source: Explore Big Sky

Taft was a temporary town built for the workers building the route through the mountains. It lasted just a few years. Recently its cemetery where hundreds of victims of a forest fire was discovered. This article at New York Times also details the history of the Milwaukee Railroad’s construction.

The Hiawatha Trail starting point – where people can ride bikes along the scenic fifteen mile journey to Pearson (and bus back!) Google Streets.

The entrance to the one and half miles long St. Paul tunnel in winter. Source: Twitter

The St Paul pass, despite all its beauty, was seen as a hindrance to railroad operation. That at Snoqualmie further west was eliminated very early in the Milwaukee’s history by means of a new tunnel. Prior to electrification of that particular section trains had to climb a further gruelling 443 feet to the old summit. The tunnel alone cut the route by nearly four miles.

A similar project was envisaged for the St. Paul Pass. A 22,000 foot tunnel would be built between Adair and Dominion Creek. This would have a very slight rise northwards and would also save roughly 350 feet of climb as well as the numerous sharp bends. Nothing came of the fifties plans – probably because the company had already suffered several financial crises.

Map of the St Paul Pass section from Dominion (top left) to Falcon (at right) and Pearson (bottom right.) The yellow line indicates the proposed tunnel in lieu of the St. Paul pass route.

The western portal of St. Paul Pass tunnel (or Taft tunnel as some call it.) Google Streets.

This Google Streets view (despite some distortions) shows the wider section of railroad formation at Roland which once consisted of loops for trains awaiting passage through the St. Paul’s tunnel.

Because of the manually operated signalling system in use on the St Paul’s pass, at Roland locomotive engineers had to phone the line controller at East Portal to seek permission to progress through the St. Paul tunnel.

Freight on the steep grade at Roland in 1979 on what was now a 100% diesel operation – and less than a year before the railroad shut for good. The remains of the former loop can be seen. Source: Pinterest

Compare these two pic (above and below) – the same mountain top is seen is in both and illustrates the huge elevation the line had to climb.

Dramatic view of Clear Creek trestle (just on the 3600 foot elevation) from near Moss Creek. Height difference down to it of perhaps 400 feet? The railroad took another six miles or so just to reach this! Probably another 180 feet or so climb up to the summit tunnel from here. Source: Twitter (Note: This is from a Twitter account that no longer exists thus an archived image has been used here.)

The railroad passes through Adair (3805 feet) where there was a loop and a section crewman. In terms of signal staging posts and loops on the St Paul’s Pass these were at Bryson, East Portal, Roland, Adair and Falcon.

Hiawatha Trail information board at Adair. Source: Ride the Hiawatha

From Turkey Creek the Milwaukee Road/Hiawatha Trail can be seen climbing the mountain in the distance. Source: Twitter

Drone view of Clear Creek trestle. Left is towards Avery, right towards the summit. Source: Twitter

A Little Joe (as helper) seen with a freight climbing towards Pearson. August 1971. Source: Twitter

From Pearson the route of the Milwaukee is now a public highway and utilises the trestles and tunnels that were part of that route. There used to be a concrete bridge over the Milwaukee Road just before Avery but of course that no longer exists..

Avery, Idaho – the western end of the 440 mile electric route. Today this is a highway! Source: Twitter

There was a considerable gap between the Rockies electric division (440 miles) and the Western electric division (216 miles.) It has been argued had the Milwaukee electrified this missing gap it would have ensured the future of the line. Who knows! As this extract from a letter published in 1974, its clear the Milwaukee Road was making a big mistake dumping its venerable electrics….

The very words in the last paragraph of this extract strikes as only too important – especially in these days of fossil fuel use and climate change. This famous electrified railway was powered by water too – and its one that would have had a negligible CO2 footprint.

Lovely shot of a 1915 built Boxcab at Avery. Its 40 year old younger sibling, a Little Joe, stands alongside. 1973. Source: Reddit

End of an era:

The Milwaukee Electrification – A Proud Era Passes (in PDF format from this page at Streamliner Memories.)

Introduction: Electric Railroad through the Rockies

Part One: Harlowton to Butte