By Rail to the Mumbles

Today is the sixtieth anniversary of the closure of South Wales famous electric railway, the Swansea and Mumbles. It was a very unusual line being one of the world’s first ever passenger railways, and despite being described as a tramway, legally it was a main line railway. The final train ran in January 1960. Huge crowds of onlookers, dozens of enthusiasts, followed in their cars, on their motor bikes and bicycles as they sought to take photos/movies of the last ever train to make a round trip to Southend.

The section from Southend to Mumbles had closed a few months earlier to make way for a new road that would enable the replacement bus services to reach the pier itself.

The Swansea and Mumbles was featured at length last year – this is an additional tribute with pictures that were not featured in the original article. Again the direction is mostly westwards around the bay from Swansea to the Mumbles. Enjoy!

First a map to show where the railway went exactly. As it depicts, the earlier route and the later route (1889) largely follow the same alignment as far as Oystermouth. In my previous post I looked at the differences in alignment a bit more closely. The original Oystermouth Railway for example followed the main road all the way however it was late re-aligned to follow the coastline. The Rutland Street end of the map is slightly wrong, but not anything to worry about.

Map of the line from Wikipedia. (Larger versions can be seen on that page.)

A rarity! The first ever edition of Charles Lee’s book on the Oystermouth/Mumbles Railway. 1942. Charles E. Lee was a prolific railway historian and wrote a good number of books on the Welsh railways as well as many others. Source: Twitter (Note: As of May 2020 the account ‘RailwayanaUK’ has been suspended/deleted thus an archived image is used here.)

Front cover of a video featuring the Mumbles Railway. Top: Blackpill. Bottom: Mumbles Pier. Source: Twitter (Note: As of May 2020 the account ‘RailwayanaUK’ has been suspended/deleted thus an archived image is used here.)

The railway at Rutland Street with its one and only steam tram engine during the 1870s. The carriage on the right was one of the line’s earlier examples. Source: Twitter

Lovely turn of the century photograph of the Mumbles train waiting to depart from Rutland Street. Source: Amgueddfa Cymru

The newly electrified railway in its early days. Source: I Did It This Way

1950s view of the Mumbles railcars at the Rutland Street terminus. Not brilliant quality but nevertheless of interest. Source: Pinterest

The old steam sheds at Rutland Street depot. Source: I Did It This Way

No.11 at Rutland Street depot. Source: I Did It This Way

Old sign denoting the main stops on the railway. There were other stops such as Argyle Street and also St. Gabriel’s – which must have been one of the busiest halts in the world! Source: GW Railwayana

The railway at St Helens as viewed from The Slip bridge. Source: PicClick

The next stop at St. Gabriel was one of the line’s halts yet by decree of its location it too was also perhaps the busiest stop! The nearby cricket ground was largely responsible for this unofficial stop being what must have been one of the busiest in the world! There was a loop but it seems it was kept out of use much of the time for the trains were too long to pass anyway!

Red flag for a train! St. Gabriel’s. The is a crop of a previous image I showed last year. Source: Twitter

The old train at St. Gabriel’s. How popular it was! Source: Twitter

The railcars when they were brand new in 1929. Source: Coflein

Between West Cross and Norton Road. This is about where the steam railway’s former station, Lilliput, was. Source: Twitter 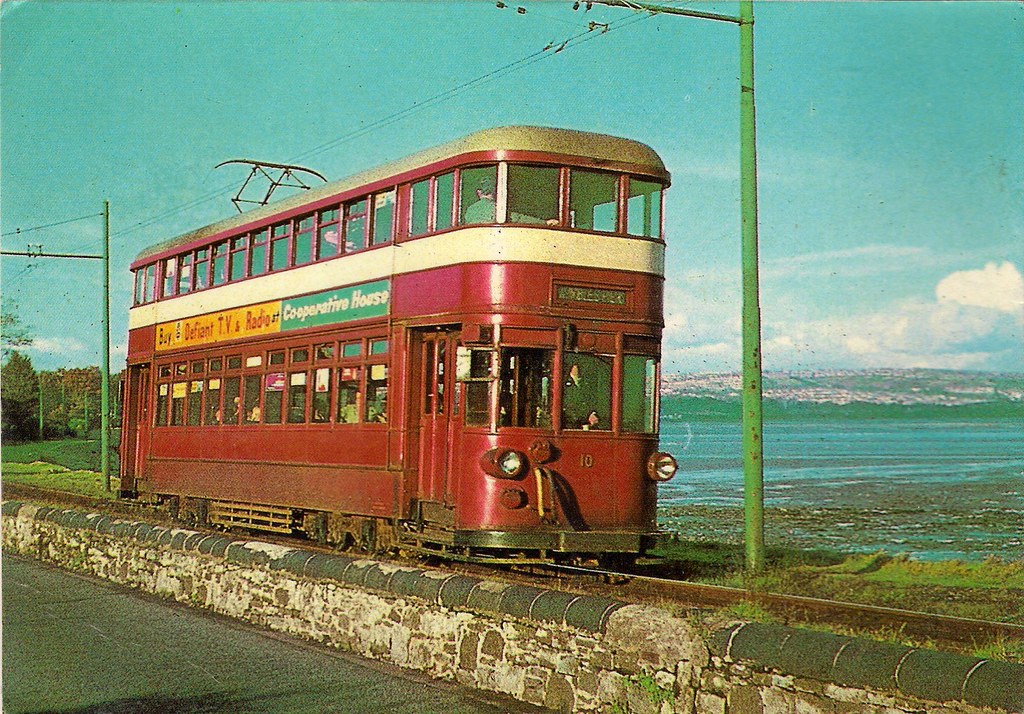 Railcar no 10 on the single track section just past Norton Road. Source: Flickr

The line just past Norton Road on the way to Oystermouth and Mumbles Pier (in the distance.) Source: EBay

0-6-0 tank on the Swansea and Mumbles railway, probably 1890s. This is probably the old loop that existed north of Oystermouth. Source: Amgueddfa Cymru

The much loved railway’s 150th anniversary celebrations at Oystermouth in 1954. Sadly just a handful of years later the line had shut for good . Source: EBay

Southend in the early days. This is where the passing loop for the electric railcars was sited. Source: PicClick

The same location with railcar no.6 on a working from Mumbles Pier. Source: EBay

Southend station in steam days. Note how farther back the double track section is compared to electrification. Source: EBay

View of a train that’s just arrived at the Mumbles. Source: Twitter (Note: As of May 2020 the account ‘RailwayanaUK’ has been suspended/deleted thus an archived image is used here.)

Mumbles Pier station at the turn of century. Source: EBay

Lovely 1950s colour photograph of the train at Mumbles Pier. Shame about the text! Source: PicClick

Ticket for the final run in 1960. These were issued in purple, red, yellow and beige. Source: Swansea Railway Modellers Group

The last railcars to operate on the line at St. Helens. It was driven by Frank Dukin who had worked on the railway since 1907. Source: Facebook

The final train is seen, below, making its way back to Swansea and these children are posing as it passes.

The railcars arrive back at the depot. No sooner the festivities ended workers began demolishing the railway in double quick time. Picture previously featured. Source: Twitter

According to Wales Online ‘The track was torn up and the trams were dismantled by a specialist breaker firm, Thomas Ward Bros within minutes of the train returning to the Rutland Street shed for the final time.’

It will be noticed the plaque on the railcar in the above picture says 1804 – 1960. Most agree the railway ran from 1807 to 1960. Which is correct? Both are in fact right! The earlier date refers to the act of parliament which enabled the line’s construction. The first tracks were laid in 1805/6 and a goods service to the quarries at Oystermouth began soon after but there’s no definitive record on when it began. 1807 is when the company officially decided to carry passengers – without a doubt one of the world’s first examples.

My other feature on the Mumbles railway