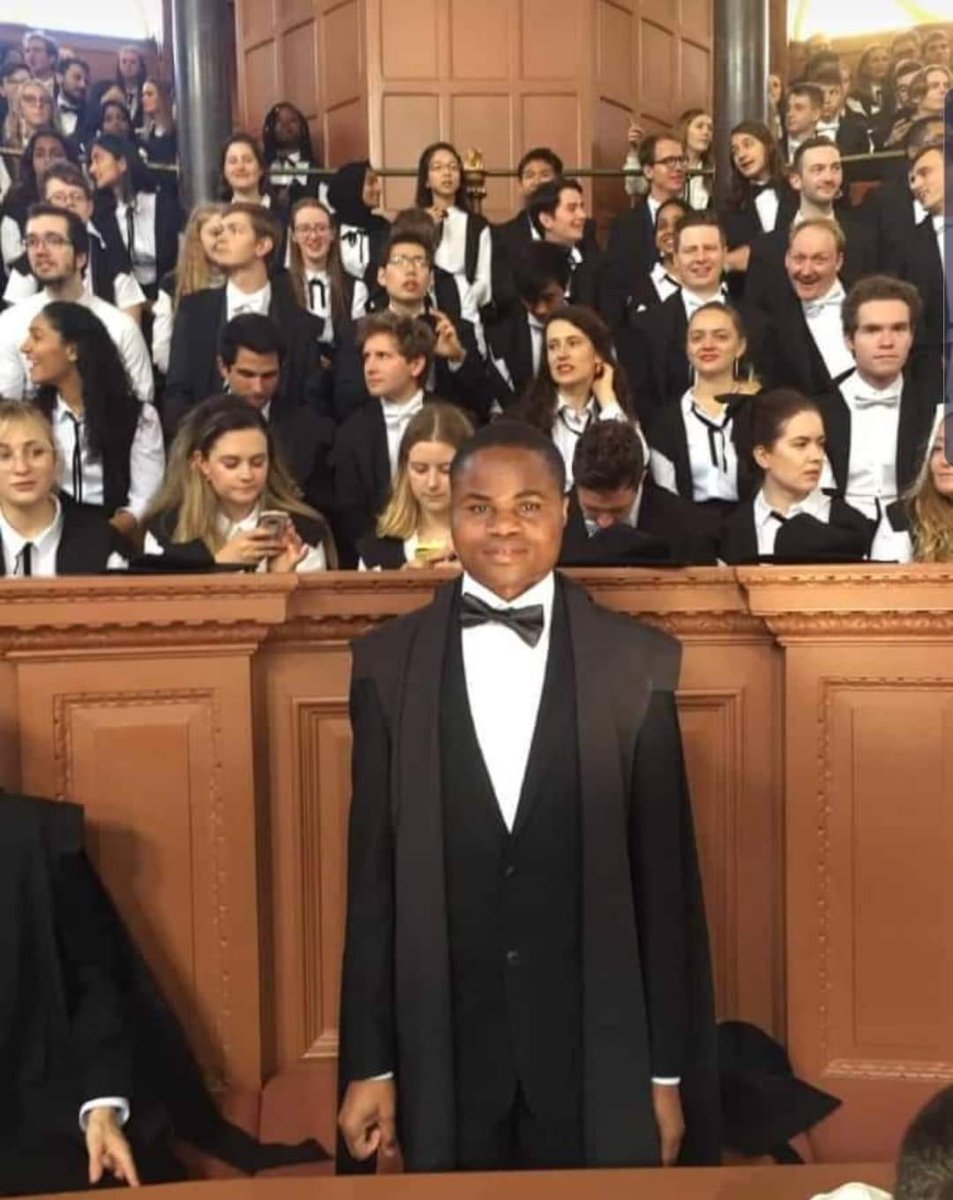 Ebenezer was suspended from the Oxford Union and banned from rejoining it until May 2020. This was later revoked.

The Oxford University Africa Society (AfriSoc) strongly condemns the violent, unjust, inhumane, and shameful treatment of our member, Mr. Ebenezer Azamati, a Ghanaian MPhil student in International Relations at St. John’s College, at the Union Chambers by a Union staff on the evening of 17 October, 2019. No individual deserves to be treated in that manner. Source: Oxford University Africa Society

Part of the statement by the Oxford University Africa Society.

The Oxford Union later reinstated Ebeneezer’s membership and unreservedly apologised for the incident, which actually happened in October 2019 (but had only recently been brought to international notice by a leading newspaper.)

How would I know what he went through? Well I do know. Its as simple as that. Because of my disability I get people constantly trying to override my rights or subvert any explanations I may have. Let me give a recent example just in case anyone thinks I haven’t experienced the same shit. 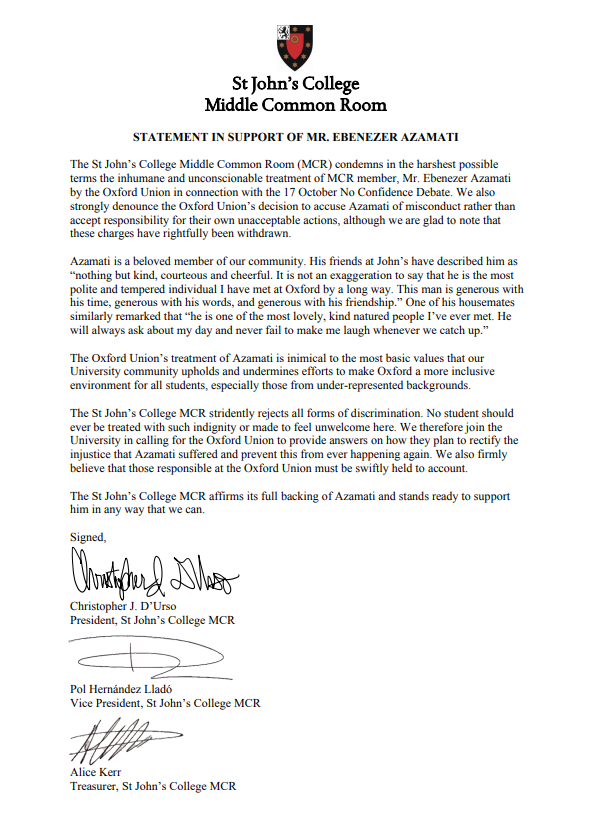 Just over a year ago I was asked to leave my seat despite it being allocated for me. This by a woman who was white, abled and very insistent. One of the main organisers no doubt. She wanted me to leave and was asking why I was there. How do I know that? Well I had an interpreter who was telling me what the woman was saying. I was flabbergasted because having sat in my allocated seat it was being demanded that I leave my seat. And what for, I could not see.

She was demanding that I sit elsewhere – away from the interpreters and planatypsists. That would have been absolutely no good to me. She was assuming I had no right to be there. What is most shocking is this was actually the Mayor’s Office for Policing and Crime (MOPAC) hate crime conference for disabled people.

It felt absolutely like hate crime to me. And a conference where hatred was directed at vulnerable people.;.

She resolutely continued her demands. It was most outrageous. I felt she was going to call the security and I was indeed getting quite frightened because I was at a hate crime conference and this was happening. She was not even listening to the others. What was worse is she was acting as a total audist, impervious to my needs and ignoring other people’s assertions and continuing to speak to me as if I could absolutely hear every word she was saying. This is the very blindness (for want of a better word) a lot of abled people practice. They just don’t see their isms.

How dare the GLA, the Mayor’s Policing and Crime department even have a practising audist on their staff?

Now that is the very point. People just walk over you. They are totally impervious (or worse) to the fact you have a disability, or even any sight of a good reason for why you are doing what you are doing. They come along and they ram some outrageous shit down your throat – you are vulnerable and they dont even recognise what they are doing to you is indeed most damaging.

Since that MOPAC incident I absolutely wont go to any conferences now. Thanks MOPAC you did a great job at delivering hate crime to one who is already a victim of hate crime.

That very MOPAC conference is evocative of what happened to Ebenezer Azamati. He was in those seats for a very good reason just as I was in my seat for a very good reason. No doubt a lot of people will have seen the video of security trying to forcibly remove him and him getting upset even after trying to explain his situation.

Let’s face it these security, these white security staff were living in a backwards world. I’ll show you why.

Picture of the room at the time of the incident. Youtube

Look at this picture of the Oxford Debating Union room at the time Ebenezer was being targeted by these security guys. He’s in the picture right near the door to the room itself with people surrounding him. As can clearly be seen the room consists of rows upon rows, and there seems to be a barrier of sorts between the first row and the rearwards rows.

We have several problems in this scenario for a start. The room isn’t even disability friendly. Any disabled person, even in a wheelchair, would have to be at the front. Unless of course they were confident of sitting in a rearwards row. But that is entirely their choice – not the security’s or the union’s.

(Upon reading the material on this matter it seems the seats are reserved for tellers, and that is why there was controversy. Its not a very convenient arrangement if one is disabled and has to be near the door, for example. )

Perhaps by convention anyone would normally have had to sit in the rearwards rows. Its a hassle and the fact Ebenezer is blind does not make it easy. Obviously he wants to just sit in that seat for a while and then leave directly by the door.

Ebenezer Azamati was the FIRST blind student from Africa to enrol at Oxford.

In fact he has it mapped out in his mind. Sit in that very seat. The door at a particular angle and he would know where it was without having to find it. He would have listened and located the door and where it was exactly. He would even be able to discern whether the door was open or not and sense the right opportunity to leave the room without causing a distraction.

What Ebenezer Azamati was doing was simply something within his capabilities. Rather than sit in some rear seat and have to get up and perhaps bump into others because remember even if he had arrived early and ensured he didn’t bump into others remember other people would too be arriving and taking up seats about him and he would not known the others exact positions in order to carefully negotiate the place when he departed.

Essentially he was facilitating the venue so that he would be the minimal of disruptions when it came to the time for him to leave. Surely the Union should have been happy with that?

Instead they gave him shit. I mean real shit. Its totally outrageous.

The staff manhandling him clearly had no idea of his needs. Like at lot of people too I encounter. The fact he was Black of course made it worse.

In terms of racism as well as disablism, if you had watched the video, did you not see the people in the row behind smirking? Why for goodness sake did no one leap to his defence?

In my view the incident showed this just was like throwing him to the dogs. No-one cared. No-one thought to think beyond the superficiality of what was apparently happening. No-one realised there was indeed a much deeper element in the equation that absolutely no-one understood yet all of these people were exacerbating the situation through their very non-cognizance.

Totally outrageous is all I can say. At that GLA meeting I felt like hitting out, lashing out because this woman had no clear idea of her shocking deep rooted ableism. Yes it was ableist the interpreters and the others could see it too. And despite their pleads these were being ignored. And this is what was happening in Oxford. A very simple case of accessibility and needs being blown up into what amounted to a major crime.

The Oxford Union apologises unreservedly. Many think this is just not good enough. Source: Twitter

It makes me very angry that people can do this. What Ebenezer Azamati needs to do is sue the Oxford Union for abject discrimination, both disability and racist. These people must not be allowed to get away with it.

The resignation of the union president over the Ebenezer Azamati case is simply not enough. Those security men need to be sacked immediately. Gone completely. What’s more is the Oxford Union president should be replaced with someone who is both disabled and black. Stop having ableist societies with narrowly conceived views of who people are and what they can or should do and what their looks should constitute.

Report on the incident. Guardian

The latest on the incident. Blind student ‘upset’ by response after row

The elephants of tomorrow

Oct 9, 2019
We use cookies on our website to give you the most relevant experience by remembering your preferences and repeat visits. By clicking “Accept”, you consent to the use of ALL the cookies.
Cookie settingsACCEPT
Manage consent