Some of you will know Year 3 is a Steve McQueen arts project. This substantial work involved the photography of the year threes at each school in London that wanted to participate ( practically all of them did contrary to expectations!)

Many media sources and blogs have been writing about the #year3project since its major launch a couple of weeks ago, however I decided this would be better as a part of #WorldChildrensDay – to be celebrated on 20th November 2019 – because its that which also celebrates children as well as essentially being nearly the end of the Year Three project displays that have been widely seen on the tube system and the streets of London. In fact #WorldChildrensDay – as we will see later – is something new for the UK.

In terms of the #year3project, there are 3128 photographs taken at 1504 schools in London, with a total of 76,000 pupils. A fair number of these were exhibited at 613 locations across the 33 London boroughs. Those seen on the tube were just a small percentage of the total.

Each image is uniform: the same distance from the photographer, often with similar wooden floors, gym equipment and bulletin boards in the background. Yet it’s also unique: each child’s face — every beaming grin, awkward smile or deadpan gaze — is its own world. Source: Standard

Exactly! What the Standard has described is right, especially when one sees these photographs in their full size as tube or street display posters.

As of now there will be progressively fewer displays of Steve McQueen’s photographs in the public sphere – which means in due course the only remaining Year Three displays will be those at the Tate Britain. And where this impact the Standard has described wont be so great unfortunately. 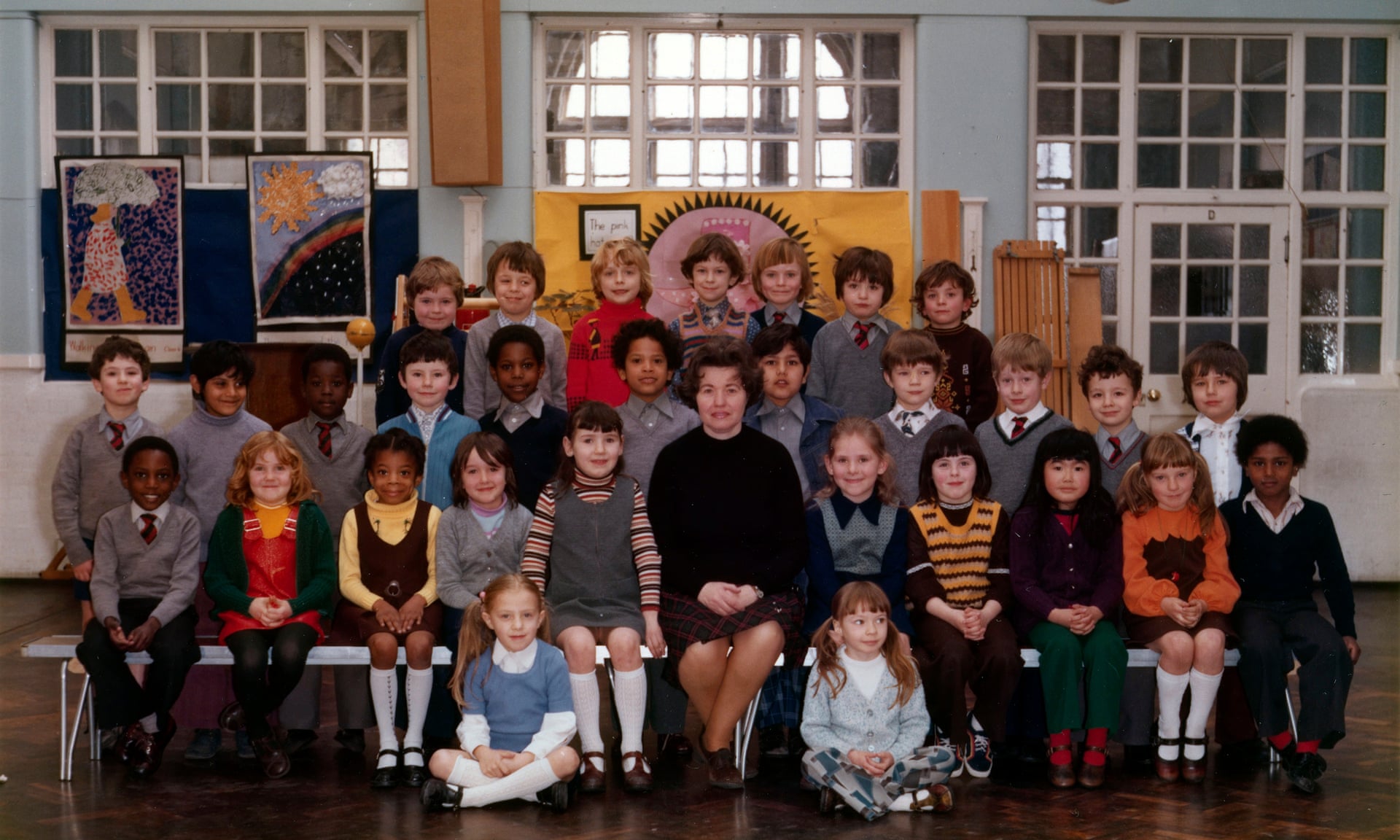 Steve McQueen’s own Year 3 photo, 1976. He is fifth from left in the centre row. Source: Guardian

It is interesting that Steve McQueen uses his own year three photograph from 1976 as an example of how the #year3project should look. Actually many of these school photographs are standard, being taken in the same location year after year, which means generally they are run-of-the-mill. McQueen has attempted to take that further and show these (or at least the 3128 that were taken between October 2018 and October 2019 by the Tate’s photographers) in a new way not envisaged before.

The reason there are so many of these shown at Pimlico is because the station is the nearest to the Tate Britain where the main exhibits are. If one visits this its a huge exhibition covering practically the galleries’ entire walls and totals 12 rows in height thus the exhibit at Pimilco (or at any of the other tube stations, railway stations or street locations that will be showing these) is the best means of viewing the displays at the size they were intended to be shown at. The locations of the 613 London-wide displays can be seen here but be warned these will progressively get fewer and fewer.

Photomontage set one of those seen at Pimlico tube.

Photomontage set two of those seen at Pimlico tube.

In the same way as the #year3project, World Childrens Day is also being featured on the tube. Roundels for these have been seen at Green Park (Jubilee) and King’s Cross (Victoria.) There isn’t actually any actually tie-in between the Unicef and the Steve Mc Queen initiatives, however its nice that there is an overlap of the two and its why I am featuring both!

I was surprised to learn that Children’s Day has been celebrated for more than a hundred and fifty years, this is in fact its 162nd year!

Children’s Day began on the second Sunday of June in 1857 by Reverend Dr. Charles Leonard, pastor of the Universalist Church of the Redeemer in Chelsea, Massachusetts: Leonard held a special service dedicated to, and for the children. Leonard named the day Rose Day, though it was later named Flower Sunday, and then named Children’s Day. Source: Wikipedia

This is the first time TfL and Unicef are collaborating to produce a World Children’s Day theme across the tube. Schools were invited to design an Underground roundel or Thought of the Day, focusing on clean air, the environment and education, as well as the best things about living in London!

The template schools used for their #WorldChildrensDay roundels.

This was in the form of a competition, with the best entries for a dedicated roundel as well as the best Thought of the Day. Competition entries were to be submitted to TfL by the 1st November. Which means there’s been just a couple of weeks to judge the entries and get the first winning entries printed out!

This is clearly a brand new initiative, World Children’s Day has been celebrated by other countries and on different dates. Currently the UK celebrates it on the second Sunday of May each year but not in such a big way as it is hoped will be done with #WorldChildrensDay on the 20th November.

If one really wants to see the very first web page advocating what is known as National Childrens’ Day, here’s the first page shown at the Internet Archive. What it tells us is the UK celebrates this day nationally in May and that was done for the first time in 2015.

Screencap of the launch of the very first National Chidren’s Day in 2015.

Its clear the UK intends to celebrate both days in May and in November.

Some UK organisations prior to 2019 did celebrate that on the 20th November but called it Universal Childrens Day instead. All very confusing! That is the problem which I think Unicef are trying to address – countries are gradually being brought together to celebrate the same day every year which is the 20th November and this year it is the UK’s turn.

The only Thought of the Day posters I have seen so far has been that at King’s Cross (Metropolitan.) It was a sort of let-down as it had not been put up properly and was all creased, it wasn’t even square. I tidied up the image to make it more presentable. These posters are a simple print run for TfL as stations can print off their own copies and what is probably happening is here TfL sends out the master images (tiff or png format perhaps) to the allocated stations and they simply print them out.

The #WorldChildrensDay ‘thought of the day’ poster seen at King’s Cross.

Having shown some of the Pimlico tube posters earlier, here are two more sets of those photographs seen at the station’s platforms. Many reports say there were jut fifteen of these on the southbound platform however if people did look there was a sixteenth on the northbound platform! This additional photograph meant I was able to make photomontages consisting of four sets.

Photomontage set three of those seen at Pimlico tube.

Photomontage set four of those seen at Pimlico tube.

The exhibition at the Tate we cover very briefly next. The photographs were sited in the main Duveen Galleries. These are just through the main entrance on Millbank. The exhibits are where one can see the full set of 3128 photographs, although I must add that only the lower third of the full height exhibition displays can be seen to any good effect. It just means ironically many schools’ third year portraits are well out of sight and means just those on the lower rows that may be lucky to get any recognition of any sort.

Its an exemplary project but in my view its just too big to really appreciate in any sense. The vast scale of the photographs across the walls of the galleries is certainly impressive but at the end of the day it seems this is more about quantity than quality. As I pointed out earlier, the expectation had been that not many would want to participate in the project but practically every school in London has wanted to and that is why there has been so many of these photographs.

General view of the Duveen Galleries showing the vast size of the exhibits.

The Tate Britain says of its latest exhibition – and reveals that the artist himself didnt even take these photographs! Essentially what it boils down to is McQueen himself was simply the curator of this project.

Explored through the vehicle of the traditional school class photograph, this vast new art work is one of the most ambitious portraits of children ever undertaken in the UK. It offers us a glimpse of the capital’s future, a hopeful portrait of a generation to come. Steve McQueen invited every Year 3 pupil in London to have their photograph taken by a team of specially trained Tate photographers. They included children from state primaries, independent schools, faith schools, special schools, pupil referral units and home-educated pupils. Source: Tate Britain

One of the exhibition panels, consisting of 420 photographs in total!

In terms of an alternative view of the project, this article at Frieze is of great interest. The author’s view of these is the photographs do not have the necessary impact that is claimed….

McQueen’s intentions are good… he is mounting a very visible defence of both inner-city diversity and the necessity of safeguarding an education system that, as a result of ongoing cuts to government funding, is close to disrepair. Yet, while commendable, these views are anything but radical. Moreover, although McQueen raises these topics, he does little to provoke further discussion of them. He fails to problematize them, to pressurize them, to politicize them, even. (The billboards, while charming, are devoid of any contextualizing information, meaning they are more confusing than they are compelling.)

May 27, 2021
We use cookies on our website to give you the most relevant experience by remembering your preferences and repeat visits. By clicking “Accept”, you consent to the use of ALL the cookies.
Cookie settingsACCEPT
Manage consent