In the first instalment of this two part series, I looked at Oxestalls Road bridge, the Timberyard development and Blackhorse bridge, plus the wharves in between and the canal towards Trundleys Road. This second post covers the section north from Oxestalls Road bridge towards Greenland Dock.
As previously mentioned Oxestalls Road Bridge is unusual that it is a modern (sixties) structure built at a time when the canal was about to close. Being such it was also one of the biggest such structures to be built across the entire canal system at the time. The purpose of the bridge was to facilitate access to the new estates then being built around the canal for the Greater London Council, namely the Pepys estate.
The picture at the top of page shows the hydraulic mechanisms used to operate the lock gates on the canal, according to the information board on site it is described as a jigger or ram.

Looking north from Oxestalls Road in 2018
These two pictures are of the same stretch of parkland north of Oxestalls Road, but they couldn’t be any more different. The top one is August 2018 and shows the new Surrey Canal Linear Park. That below was taken in 2002 showing a different environment altogether. The green space didn’t go very far at that time, there was a wall at the far end and beyond here the canal’s alignment still remained for a short distance, having been infilled with gravel and a few wharves still in existence.

The same location in 2002
The linear park comes complete with words and phrases commemorating the former waterway. Its nice to walk along here however like other bits of London’s lost waterways, especially the Croydon, they’ve used words and terms that don’t actually belong hereabouts but are more akin to the canals north of London and the Midlands. I don’t think anyone on the Surrey canal itself would have known what Gongoolzer meant along with other terms that too have been used, so these are not historically accurate.

Gongoozlers is historically wrong for the old canal, but once a canal is spot on! Because there WAS once a canal!

Some distance north of Oxestalls Road are bridge abutments on the west side. These once belonged to the Deptford branch railway, whose line began at Coldblow Lane, almost right by the Grand Surrey’s canal’s branch to that lane (this stretch was once part of the Croydon canal.) The Deptford railway passed along the side of the canal then into a tunnel underneath the main line, before crossing the canal on the celebrated lifting bridge. The bridge abutments at where we are now was the railway’s third encounter with the canal.

Nice memorial to the canal, except its not quite accurate…. these are the abutments of the Deptford branch railway

Above & below: The Grand Surrey Canal at the same spot, perhaps fifty years apart. 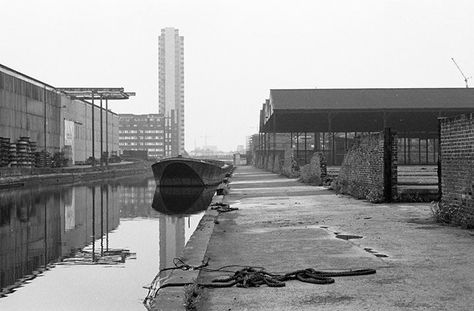 Near Plough Way, probably late sixties. Source: Twitter
Looking in the opposite direction, the canal’s alignment has now been employed by these new residential units and the Plough Way cafe. By the way the name of this linear park is the Surrey Canal linear park – whilst Google cites it as the Grand Canal Avenue! It was about at this point the canal was in readiness for the stretch underneath the old Plough Way bridge, thus the cafe has the right name in terms of the area’s history.

The Plough Way cafe with its splendid view down the Grand Surrey’s alignment – a bit like Little Venice’s Cafe Laville without a canal!

The former section of canal infilled with gravel, looking south from Plough Way, where the cafe is now sited
At the rear of the cafe is the access road to Plough Way. The rest of the canal’s course is occupied by residential properties in Iceland Wharf. Hereabouts is one remnant of the Grand Surrey and this we will look at next.

The old Plough Way alignment (which I have written about a few times) had a rather odd course which was to effect a turn to the south by Yeoman Street and then turn eastwards, rising onto a bridge over the canal itself. The reason for this arrangement was because there wasn’t any clearance above the canal’s entrance lock. Its original lock had been further north where Russia Dock/Redcliffe Road was sited. Prior to these new docks being built the canal had its own course from Rotherhithe. In due the docks were expanded and the canal therefore was accessed by way of the network of new docks, or directly from the Thames at Greenland Dock. The canal’s one and only lock was relocated south of Greenland Dock thus Plough Way had to be realigned in order to make way for this.

A 2008 view showing the old Plough Way wall and one of the area’s last remaining timber yards. The cars are parked at Iceland Wharf
There are few photographs that actually show how the old Plough Way looked hence it is quite difficult to appreciate its somewhat strange alignment. The alignment seen today seems far more reasonable and straightforward but it too is a result of the older thus the new alignment fits in rather awkwardly.

As this 2018 picture shows, the wall has gone, however the base of the old road remains as a boundary
Recent investigation shows part of the Plough Way retaining wall remains. This actually forms a dividing partition between the different new estates hereabouts. It seems the old road remained, cut off and out of use, until about 2012, as evidenced by Google street view. The wall can be seen in Google Earth stretching as far as the residential area known as Iceland Wharf.

The site of the old junction between Plough Way and Yeoman St in 2018. Compare with below

2012, again, the old timber yard can be seen plus Eddystone tower, a view not possible today. Source: Google Streets
On my visit to Plough Way in 2002 the old road was still essentially complete if a bit overgrown. As my pictures show, the street lamps still existed and the pavements on either side had become overgrown, whilst any access had been prevented by means of a wall. Just a couple of years later all this would have gone as the new Iceland Wharf development took a foothold.

Plough Way in 2002 – still extant and complete with street lights. Eddystone Tower in distance
I have drawn this map specially to show where the old Plough Way went and how it related to the canal itself. Plough Way is in red and the canal in blue. The red rectangle is the site of the old Canal office, which very disappointingly was demolished despite being seen as a building of historical interest. As evidenced by the map, the old stump belonging to Plough Way was realigned to face the west side of the canal office.

Photographs of the lock, the canal’s last commercial traffic and Plough Way bridge are even harder to come by however here’s some from the Portcities website, which ceased in 2009 and these pictures no longer exist – not even on the Internet Archive. I think the Grand Surrey feature was included on that site about 2004 and it consisted of a number of pictures showing the entrance lock and lighters, though there is one picture showing the canal further towards Old Kent Road depicting disused wharves.

Picture of the lock filling, this is probably just the tug returning on its own
There is one picture still on the Port Cities site and this shows a lighter entering the lock.
Although its generally acknowledged the canal stopped working in 1970, it was actually 1971 when the very last boats ventured along its waters. This was in fact a tug sent to collect some empty barges moored up towards the Oxestalls Road stretch before the gratuitous work of infilling the canal began. The canal westwards from Blackhorse bridge had already been cleared of vessels judging by other photographs.

The Canal office in its last days of use as a community centre
The Canal office itself existed until about 2003. I have published pictures of it as it was in the 1980’s and in 2002. The above picture is of the canal office in its twilight days, the wreckers’ ball just a few months away. In those final days it had been a community centre and base for the local water sports club. I do not know how anyone allowed this structure to be demolished especially as it was clear it was historic. But then again, they’ve too been demolishing so many historic structures on the canals north of the Thames and hoping no-one bats an eyelid…

The Canal office was demolished long before its information board met its demise. This Dockland Heritage sign remained on site for quite a number of years, stranded in the middle of the construction site – well behind fencing and out of the reach of people. This occurred whilst indecision dithered over a partially built development. The picture was taken with a long zoom and a camera with not so good resolution, this being 2011. However my picture shows the sign had by then stood for about eight years without the subject in question (the canal office) being present!
What happened here is the redevelopment in question began and the canal office was razed to the ground. The basement, ground and first floor levels of the new building was constructed, then either there was some dispute or money issue, so it stood there, partially complete as my photographs show. It remained like that for quite a few years and explains why the heritage sign remained on site so long after the canal office had gone. Not long after those photographs were taken the partially built development was knocked down, a new one commenced and the heritage sign was finally swept away.
The inlet at Greenland Dock which led to the canal’s lock is all that remains of the canal in water. Its used as a slipway these days for the local sports clubs. See main picture.

Mar 7, 2021
We use cookies on our website to give you the most relevant experience by remembering your preferences and repeat visits. By clicking “Accept”, you consent to the use of ALL the cookies.
Cookie settingsACCEPT
Manage consent