The Grand Surrey Canal is South London’s lost waterway. It stretched from the docks down towards Deptford, then towards Old Kent Road and Camberwell, with branches to New Cross (originally part of the Croydon Canal) and Peckham. It was built in 1801, the engineers initially being Ralph Dodd, with his sons Barrodall and George Dodd.
This post covers the old canal route between Blackhorse Road bridge and Greenland Dock, and was prompted by redevelopment work underway at Oxestalls Road. The section of canal as far as this point was the very last bit to be used in 1971, long after the rest of the canal had closed.
I first visited the site in 1984 & 1985, just a few short years after the Grand Surrey had popped its clogs. In those early days remains of the canal’s edging and mooring rings could still be seen within the new industrial estate that had sprung up. It was easy to discern the point at which boats turned from their southwards course to a westwards one just before passing under Blackhorse bridge.

The works at Oxestalls Road to build the Timber Yard. Blackhorse Road bridge is in the middle distance
I have written about the canal at length elsewhere (and some of the old pictures I took in those days have been used on other websites and blogs but who even minds?) One of the most linked items happens to be this article comparing the more fortuitous canals in North London with that of the Grand Surrey.
Though this new development, known as The Timber Yard, is to be sited between Oxestalls Road and Blackhorse bridge, the course of the canal will be memorialised by a small stream or rill running along this section. The remainder of the old waterway north to Greenland Dock is now either a new linear park or built upon entirely. The park opened in August 2016 but has received little mention – with the possible exception of The Deptford Dame.

Oxestalls Road canal bridge August 2018
The space underneath Oxestalls bridge was once used as storage space for dumped cars. Its been cleared and no doubt when the wall on its north side finally goes, a continuous walkway between Blackhorse Road bridge and Plough Lane will be possible for the first time in about 48 years.
The bridge itself is a curious affair. Its huge, and undoubtedly the biggest canal bridge that had ever been built in London at the time. It was constructed in the late sixties for the Greater London Council, and that with the canal having just a handful of years left. No-one could have foreseen this as most of London’s docks encountered a very rapid decline. They practically slumped. Thus Oxestalls bridge was built at a time when the docks were still just about going full tilt.
Its rare to find pictures of the canal in use, and even more so to find one showing boats stuck under one of its bridges. This happens to be that at Oxestalls Road! These boats are delivering timber and logs to one of the wharves along the canal, having collected these from the docks. The trouble was, their cargo being piled so high, they couldn’t get any leeway through the arches of the bridge!

Oxestall Road canal bridge, late 1960s. Source: Locks and Life
The crane seen in the above picture belonged to Stewards and it was located at their New Baltic Wharf, just to the south of Oxestalls Road and to the east of Evelyn Road. The picture is probably taken from what was once car parking for the Eddystone Tower, but now a community centre.
The reason for the bridge was to provide direct road connections from Evelyn Street to the new Pepys estate, including the Eddystone and Daubeney Towers, using the former alignment of what were Hoopwick and Hanlon Streets. These were separated by the canal, and the new bridge brought them together – under a new name too.

Repair yard for Morris Minors on the site of the old canal, seen in 2002, with Eddystone Tower prominent

Waterman’s of Victoria Wharf, they were actually on Dragoon Road
In the other direction towards Surrey Canal Road, its a bit more problematic in terms of a pedestrian thoroughfare. A new Shurguard storage facility has been built on the canal’s site. The plans had not considered the possibility of a new footway. Local campaigners sought to have this state of affairs changed and Shurguard agreed to provide access to enable a link through to Surrey Canal Road. I’m not sure whether this is being carried through however…

Two led walks were conducted in 2017 tracing the route of the Grand Surrey Canal, and these attracted large crowds. It demonstrated the level of local interest in rediscovering the old canal. The full report can be seen in the March 2018 South East Walkers Magazine. A full report (including a walking guide) to the canal can be seen in South East Walker magazines June 2017 and June 2018.
Previously one could walk along Canal Approach as this gave access to the adjacent industrial estate that did also have remains of the canal within its environment. The gates on Evelyn Road have however been kept closed for a number of years now (except for a period 2013-2014 when they were constantly open) so the Shurguard option seems the only means of restoring a public walkway westwards.

View looking back from Blackhorse Bridge to Oxestalls Road with the new development rising
The area was once profligate with huge lettering advertising the different wharves and companies in the area. Below are some remaining examples that can still be seen in 2018.

Remains of the signage for Bridge Wharf can still be seen to this day. Daubney Tower in distance

Not so visible but a look through a narrow gap at the side of Dragoon Road still reveals what was Parker’s Wharf. I believe the new development does away with most of the wall along here. Its uncertain if this sign with its lovely tree will stay…

Blackhorse Road bridge (aka Evelyn Street) with Daubney Tower visible
Blackhorse Road bridge has remains of lamp standards which were common along the Grand Surrey Canal (and also some bridges on the Lee Navigation.) I think these too were once powered by gas, and later converted to electricity like their counterparts on the Old Kent Road bridge

Blackhorse Road bridge – lamps could have originally been gas, later converted to electricity
Beyond the Shurguard very little is left of the canal itself. The following views were taken in 2002 and show what was on the canal’s course then. But first a picture from 2018:

Sign denoting Canal Approach and Neptune/Ocean Wharves
All the places alongside the Grand Surrey Canal were called wharves. Today there are far fewer of these as ‘wharf’ is an anomaly now there isnt any waterway through this part of London. Redevelopment is also sweeping away the last vestiges of these once numerous places in Deptford, New Cross, Old Kent Road, Peckham and Camberwell, thus there will soon be very little visible reminders the canal once existed, apart from a few bridges and the celebrated Peckham branch.

Canal Approach near Trundleys Road. The canal’s edge is evident at the bases of the buildings on the left. On the right is Neptune Wharf, the subject of a perhaps controversial demolition currently underway

Canal Approach from the railway viaduct near Trundley’s Road.The canal itself once stood where the scrapped cars are
As mentioned above, part of the industrial estate along Canal Approach is being demolished for a new residential development. This picture (below) inside one of the old warehouses, a remnant of the old canal, is at Neptune’s Wharf. 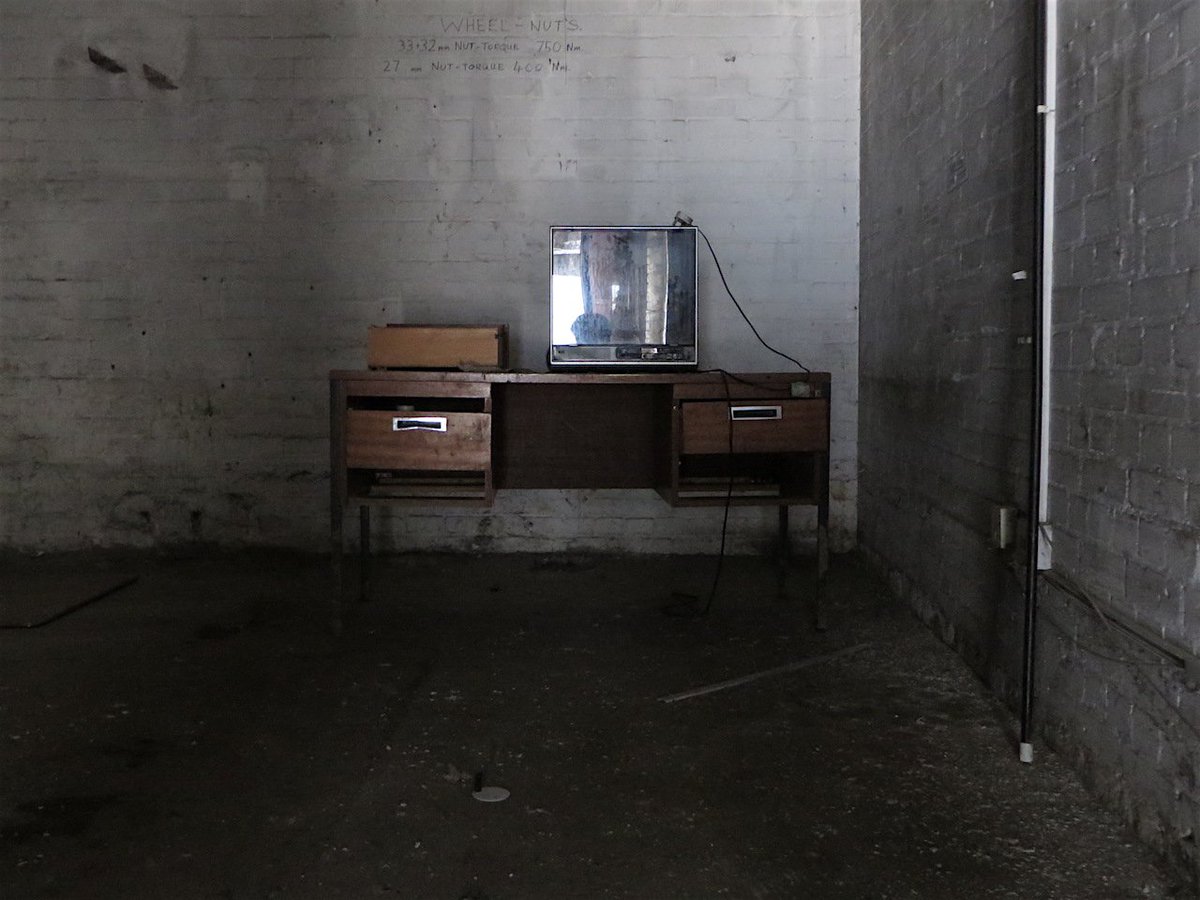 Inside the Neptune’s Wharf buildings. Source: Twitter
Beyond this point is Trundleys Road and the celebrated Surrey Canal Road. This was built in 1983/84 and initially known as New Surrey Canal Road.  The canal itself was obliterated in various stages however pictures do show the Surrey Canal Road stretch still in water around 1978, and maps do confirm this. The lack of development along here proved an unbuilt and useful corridor which was turned into this new road by 1984. Had redevelopment taken place along here earlier there would have been no Surrey Canal Road to speak of.
This feature continues in Part Two with a look northwards from Oxestalls Road to Greenland Dock.

Mar 26, 2021
We use cookies on our website to give you the most relevant experience by remembering your preferences and repeat visits. By clicking “Accept”, you consent to the use of ALL the cookies.
Cookie settingsACCEPT
Manage consent