Rochester – which has many connections with Charles Dickens and features a house of his, is a lovely town on the banks of the Medway. There is lots of history and one of these concerns the Richard Watts charity. Established in 1579, it’s intent was to provide accommodation for the poor and needy. The main building, the poor travellers house, immortalised by Charles Dickens and sited on Rochester’s high street, still exists.
Rochester’s main thoroughfare is full of old properties, including a chalet that once belonged to Charles Dickens where he wrote some of his famous novels. The poor travellers house sits in the high street, very near the town’s famous cathedral.
I have a water colour of the poor travellers house which was handed down to me. In relation to this artwork I did a search on the internet and found barely any pictures showing the celebrated rear of the property with its small courtyard. The premises itself has not even been blogged about as far as I can see, thus the idea of a post was conceived. I must admit despite searches I do not know who the artist, E. Galer was, other than it may have been an Elliot Galer, a London based artist whose work was produced between the 1860s and 1890s.

The painting of the six poor travellers house
The house is now a museum although part is still accommodation. It details the life of Richard Watts and the work of his charity, which today still exists. Like a number of buildings in Rochester, the house was used as inspiration for Charles Dicken’s novels. The last time I visited the house and museum was about twenty years or more ago! At the time it was a elderly, bespectacled, guy who gave us a tour round the premises and regaled many stories behind the charity’s work, and I think he was somewhat excited since the family member we had with us had mentioned her painting of the premises! 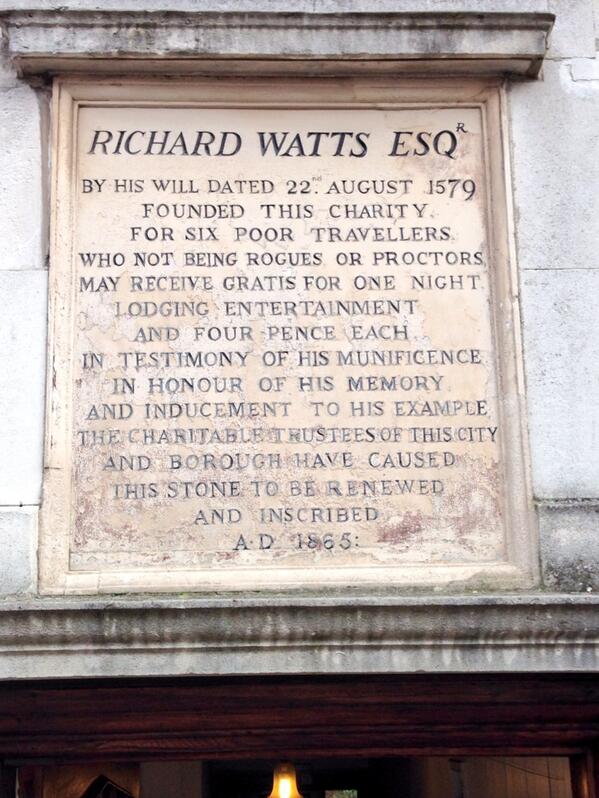 Late 19th C view of the high street and the six poor travellers house
There is something ironic about these words. A proctor generally is a military person or perhaps a law official. Four hundred years ago people’s views of officials were one of great suspicion. In the early 17th century corruption was rife among the many court officials who ran the Royal dockyards at Woolwich and nearby Chatham. Some debate as to what the term proctor actually meant but generally it denoted an important person – military, lawyer etc and as the inscription would very subtly imply, thus corrupt.
“In the middle ages most outcry against corrupt officials was directed against judges, customs officials, purveyors and local officials such as sheriffs and bailiffs.” (Court patronage and corruption in early Stuart England, Pub 1992.) Just even one proctor among several poor people would have been likened to putting the cat among the pigeons. Indeed Charles Dickens himself regularly portrayed the schism between the law agencies and the poor. Having worked as a court clerk, he made clear his dislike of the legal system: “The one great principle of the English law is to make business for itself.”

Drawing showing how things might have looked
The house was first built in 1586 and substantially enlarged in 1604 or thereabouts. That work included the rear of the premises which remains to this day and the subject of this post. The present frontage onto the high street was constructed in 1771. Thus the premises consists of a mix of various stages in construction and the rear is without a doubt the most interesting. This bit originally incorporated a dormitory for the poor travellers, and it must have been a calming place, overlooking the gardens at the rear.

Early photograph of the rear
It seems the original accommodation at the premises closed in July 1940. By 1948 the ground floor had become a museum, with newly built accommodation provided. The museum was considerably expanded in 1977, whilst the building itself received major work in 2015-16.
Six Poor Travellers House
97 High Street
Rochester
ME1 1LX
Trip Advisor reviews
Main picture acknowledgements: Google Streets

Mar 26, 2021
We use cookies on our website to give you the most relevant experience by remembering your preferences and repeat visits. By clicking “Accept”, you consent to the use of ALL the cookies.
Cookie settingsACCEPT
Manage consent