St Augustine’s church, on the east side of St Paul’s Cathedral, is one of several city churches whose tower is the sole remnant. Its proximity shows just how close the Luftwaffe came to destroying the cathedral in the 1940s. An excellent book I found dumped in a bin about fifteen years ago has many before and after London views, including has these nice historic comparisons of St Augustine’s Church in Watling Street, and rare in the book that the old one is in black and white and the more recent (1969) picture is in colour.
The book the pictures are from is London then, London now, published in 1969 by Dalton Watson Limited. The modern images procured in that book are now well over fifty years old! Just a few of these featured in the book were colour pics.

Rescued from a waste bin! My copy of London Then, London Now
St Augustine’s was one of many similar City churches neatly tucked away in a corner hence this view from St Paul’s Churchyard is quite enticing because it almost makes the church look mysterious. What is it doing there? Why is it so hidden? Actually the roads and the buildings are later additions and like other City churches, St. Augustine’s got a bit crowded out, certainly by the mid 19th Century, and by the beginning of the 20th Century its sort of in an alcove.

Image of St Augustine’s from London Then, London Now
I think the picture was taken over 100 years ago. Other pictures I find of the church show a different and more modern road layout by 1921 so clearly this picture is perhaps 1910 or thereabouts, clearly a time when horse drawn traffic was still king. This picture shown below from London Love Life is said to be 1921.Its just for dating purposes only but clearly there have been some changes including the road layout.

St. Augustine’s 1969 picture from the book London Then, London Now
The church is no longer in Watling Street, but within Festival Gardens on the corner of New Change and Cannon Street. These gardens were built for the Festival of Britain in 1951 (they are not to be confused with the bigger and more famous Festival Gardens built in Battersea Park at the same time.) The entire roads layout about here was altered and New Change is the present thoroughfare between Cannon Street and Cheapside.
The church was originally on the corner with Old Change, with the eastern part of St Paul’s Churchyard right at the foot of the cathedral. St Paul’s Churchyard was once a road all the way round the base of the cathedral, and this road basically made the cathedral a traffic island! Today its just the bit on the south side that is open to traffic, the remainder now pedestrian only.

OS map 1940s showing the old roads layout around St Paul’s.  Source: National Library Scotland
St Augustine’s was bombed in 1941 and the following pictures show how it looked after it had largely been destroyed. Clearly the spire is quite a recent job, perhaps having been built during the late 1940s or early 1950s. Its not an exact copy of the original but perhaps seeing it was no longer an active church it probably didn’t matter. 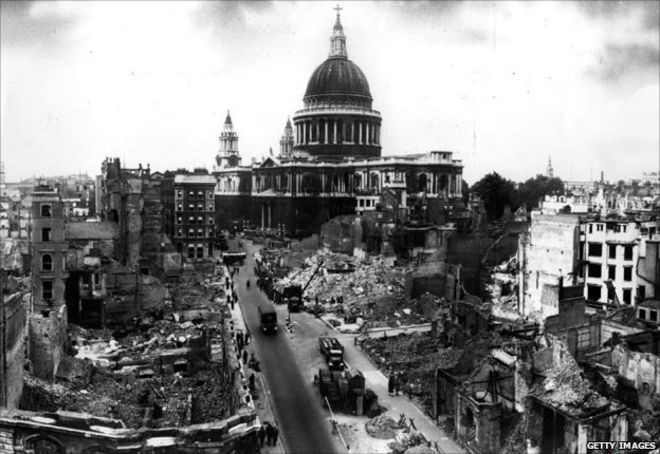 St Paul’s with St Augustine’s just visible circa 1942-43 as much rubble still extant from the Blitz. Source: ptcdn.info 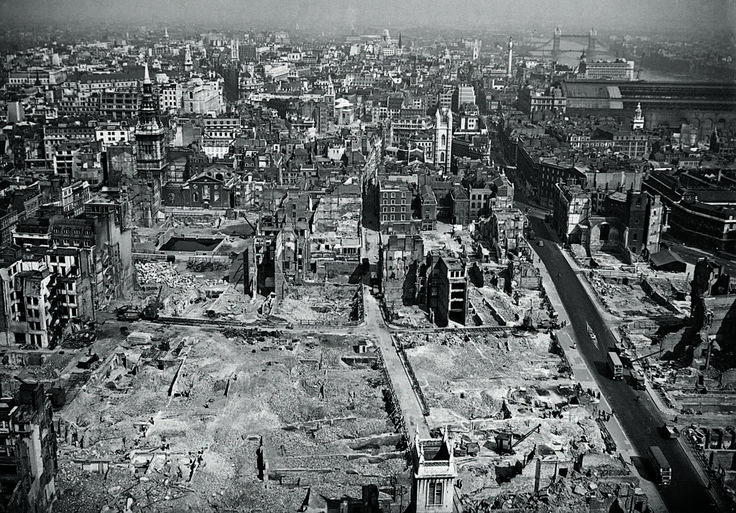 Looking east from St Paul’s. The tower of St Augustine’s is right at the bottom. Source: Pinterest
In the next picture one can see how much tidying up of the area has been done. Interestingly the building on the corner next to St. Augustine’s is still there, it seems its roof is in one piece! Looking at the OS map shown on this page, the building is marked on there too, so clearly it escaped war damage but was demolished anyway, quite possibly in preparation for the new gardens which would form part of the 1951 Festival of Britain. 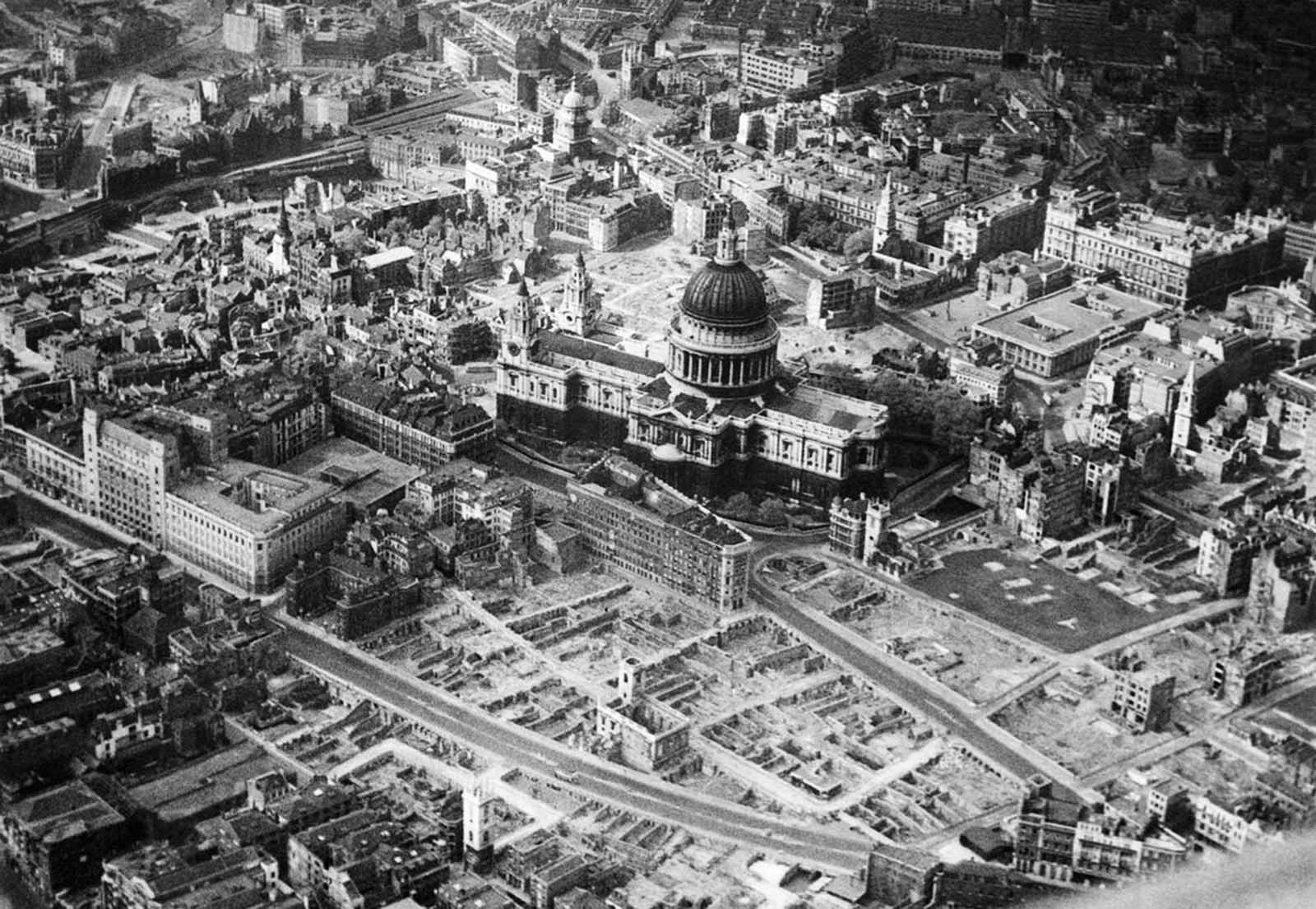 Area around St Paul’s with St Augustine’s and many other iconic City buildings 1945. Source: Blogspot
The next picture again shows St Augustine’s, this is just after the war had ended, probably 1948 or 1949 as the building besides the church has now gone. Clearly this is some sort of commemoration upon the RAF’s effort in the Battle of Britain that’s on show to the public. The plane is standing on the site of what would become New Change. 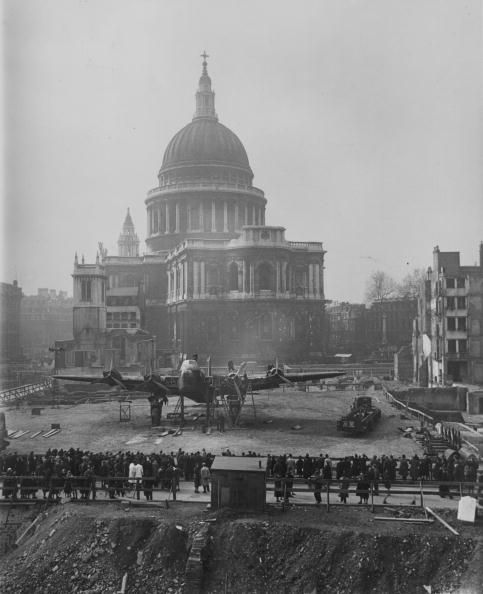 St Paul’s, St Augustine’s and RAF Lancaster bomber. Source Pinterest
Anyway back to the subject of St. Augustine’s and the act of comparing photographs. I had been meaning to take some new pictures so there would be one from c1910, 1969 and the current year of 2018. In the event it wasn’t that easy to do a modern equivalent. In fact it surprised me how much the location had changed since the sixties!
It wasn’t easy to determine where the 1969 picture had been taken. At first I thought the location had been much further forward and the initial pictures I took proved to be wrong. It was clear this wasn’t going to be a straightforward comparison.

Just to recap! The 1969 picture again from London Then, London Now
It meant I had to make a second visit. By studying the originals very carefully with the present scene, fortunately I was able to identify the approximate location. This was slightly further back than the pictures from the previous attempt and actually next to one end of the pelican crossing going over St Paul’s Churchyard.
Nevertheless despite taking a second set of photographs, upon arriving home and examining these closely it was obvious the location hadn’t quite been nailed. The 1969 image was without a doubt a wide angle shot hence a third visit had to be made. This time I took my wide angle lenses.

The final result taken from the approximate location the 1969 picture had been taken. Not perfect but close enough!
The wide angle lens I use is of the variable type, which would likely not achieve the same exact perspective. I gave it a go anyway and used a focal length of 15mm, which is more on the much wider side but not extremely wide. I could have gone down to 10mm however that would be pushing the image right out of proportion and thus not in keeping with the 1969 photo. In retrospect it was probably too wide an aperture and 16 or 17mm could have been used. However an 18mm lens had been employed on the previous visits and it wasn’t even getting the perspective right.
Ultimately I found the road itself has been very subtly narrowed. All the lamp posts seen in the 1969 photo are still there though its clear their location has changed. There’s now four of these on the north side alongside Festival Gardens whereas in the 1960s it was just three. One lamp post has gone from the south side – which means its been put on the north side instead! The one nearest to the photographer on the south side (just in front of the rather substantial dark pole which may have been a sewer vent) in the sixties picture is still there at possibly the same exact location – its just mostly hidden by the large tree that now spreads across the pavement from the right!
What will the scene look like in the next fifty years, even a hundred years….? Will it have changed so much out of recognition again? I think so. There will be more tall buildings and even though these will be some distance from St Paul’s, these will impact the skyline even more strongly than the Cheesegrater and the Walkie Talkie which are just visible. Not only these, the new 100 Bishopsgate is very visible with its construction crane on top – its height clearly a taste of things to come in the City of London.

Apr 7, 2021
We use cookies on our website to give you the most relevant experience by remembering your preferences and repeat visits. By clicking “Accept”, you consent to the use of ALL the cookies.
Cookie settingsACCEPT
Manage consent