London’s famous free ferry service has begun its upgrade. This was announced last year but has garnered very little attention in the media. The work involves the introduction of two new low energy, clean, diesel-electric ferries with far greater capacity than the present vessels. These new ferries were designed by Keel Marine Limited and built at the Remontowa shipyard in Gdasnk, Poland, with the steel being cut in April 2017 and the keels laid during June 2017. These new vessels have just been finished in readiness for testing. Sometime later this summer they will be brought by sea to the UK. 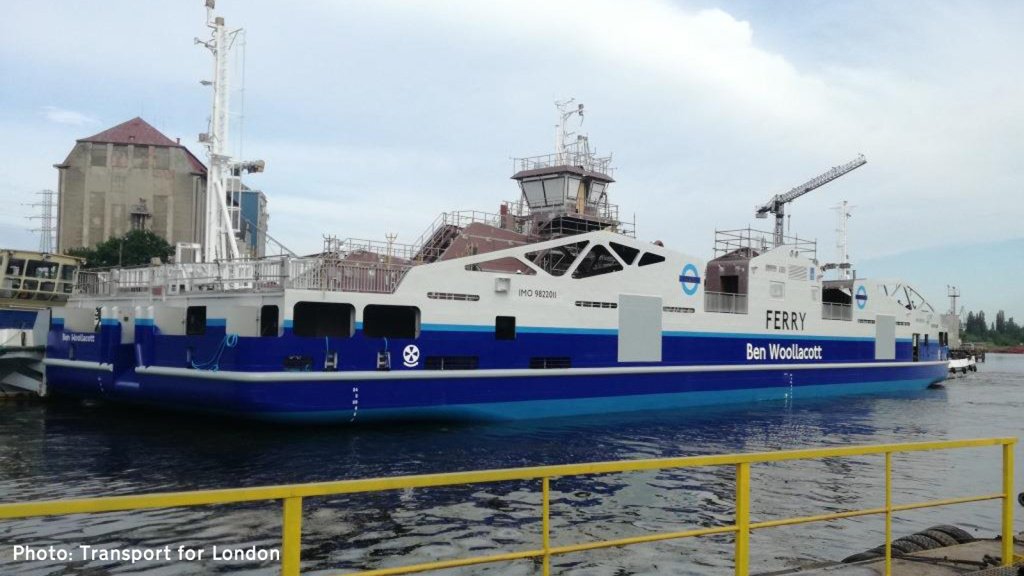 The largely completed ferry named after Ben Woollacott, seen at Gdansk. Source TfL Twitter
The £50million pound scheme involves not just new ferries and terminals. A new staff block and administration offices were built in Woolwich as part of the overall scheme. Other works that were undertaken at an early stage included renewal of the linking bridges at both terminals so they are fit for at least another decade of work. The new ferry service is due to begin in December 2018.
In 2017 TfL employed divers to survey the river bed and ensure it was cleared and prepared for the new works. Part of this was also to take sound depth recordings and establish the exact location of the Woolwich foot tunnel which lies right beneath the work sites in question. Ultimately care must be taken in building the new piers so as not to cause any impact on the tunnel.

Picture of the full works site at North Woolwich to build the new piers and dolphins
The week beginning 11 June 2018, Bam Nuttall Engineers moved in to begin work on the new piers needed for the ferry’s modernisation. They brought in a rig to begin work at North Woolwich pier. As I understand it, they will be working here until about October when they move to the south (Woolwich) pier. The reason for the shorter timescale on the south side is apparently because the ferry service will be suspended for two months thus the engineers will have full possession of the southern site.
On 20 June a huge crane was moved upstream from Tilbury to complement the works, which so far are being done from a large rig. The scheme involves the installation of two new side piers and three new dolphins per pier (six in total) necessary for the new, longer, boats. The piers wont be of the traditional kind but a new type in fact. The dolphins will support the piers. For those who do not know, dolphin generally means a special type of post specifically for mooring, for navigational purposes eg lights, channel markers etc, or keeping pontoons/piers in place. 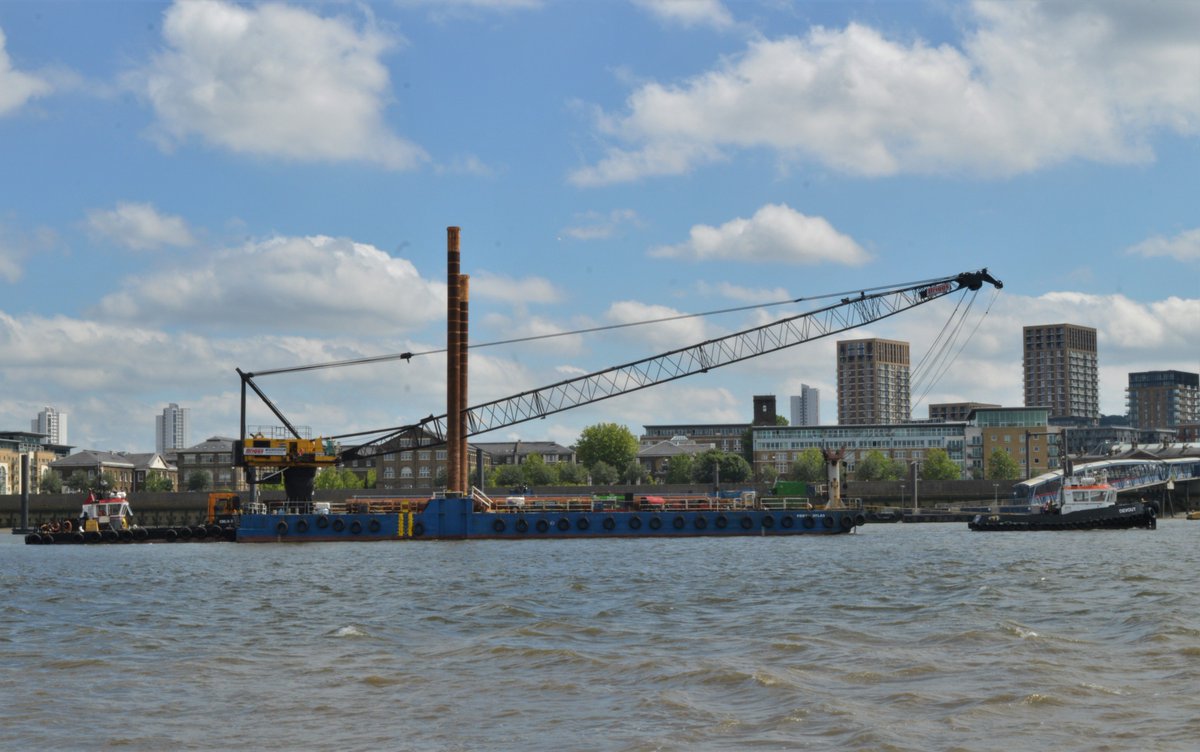 The huge crane being brought up river to North Woolwich on 20 June. Source: Andrew Christy/Twitter
The existing terminals will be kept but be supplemented by the new piers. There will be an automated mooring system which entails the use of two massive, powerful magnetic systems, installed on each of the said piers. The piers will be able to hold the new ferries in place against the loading terminals, thus dispensing the need to keep the ferries’ engines running.
Its difficult to describe the new system as I have not seen any plans, only a very rough drawing one of the engineers quickly did for me. The piers will have their bulk (with the equipment) behind the dolphins and the outer sections of the pier between the dolphins will carry the magnets. Obviously the piers will have a certain amount of movement as well as rise/fall with the tides.

Example of magnetic piers – this is NOT how the Woolwich ones will look. Source: Studio WTB
The new ferries have their bridges sideways but will basically operate the same way as the old ones. That is they will swing round as they cross the river so the vehicles are facing the right way when it comes to unloading. Conversely it too means the captain steering the vessel will always be able to see their boat docks correctly, thus enacting the automated mooring system.

Close up of the Bam Nuttall works at North Woolwich with the first pile for the new pier being driven
Upon arrival in the UK, the new ferries will be moored temporarily at Tilbury. Here a program of training and familiarisation will be undertaken with ferry staff who are retained for the new services. Sadly, as with most new things, less staff will be needed for the revitalised ferry services although the unions have agreement with TfL no compulsory redundancies will occur. On top of that generous redundancy terms will be in place for staff who do decide to leave the service when the present ferry operation ends in October.

The works viewed from the ferry. This will be the side with the magnetic equipment to aid mooring
The one small irony with this particular transport upgrade is it was decided upon before the new Silvertown tunnel was approved just a month ago! An earlier decision on the new road tunnel might have assured the old 1960s ferries would have continued to at least 2025 when the new tunnel is planned to be open. Some small comfort! At least the ferry will have new boats and there may even be a case for retention of the service beyond 2025. When the new Blackwall tunnel was opened, it was claimed the Woolwich ferry would no longer be needed. But they were wrong. The factor at that time was the ferry could accommodate lorries banned from the northbound Blackwall Tunnel. That wont be the case with the new Silvertown tunnel however, so some other case would have to be found in order to retain the ferry service beyond the next decade or so.