A homage to the old wall that divided Berlin? The sense of being shut off from the other side. Pink trying to escape… Indeed there’s a whole music album on these types of walls, a guy named Waters telling everyone how walls divide communities and are best torn down…

The Newham Trackside Wall, to give its official name, belongs to the soon to be launched Elizabeth Line and is described as a Berlin Wall – no surprise it does feel rather over bearing!

Local blog Newham 2012: “Crossrail stopping in Silvertown would relieve some of the anguish of years of construction for North Woolwich. But alas no they decided to shut out the community.”

The Green party’s local representative: “This ugly, impassable barrier runs right through the heart of Silvertown where it blights local commercial activity and creates an intimidating environment for pedestrians. Shame on the Crossrail planners for showing such contempt for local people. I don’t for one second think they would have treated a more affluent part of London like this. But because Silvertown is poor, they think they can get away with it – and the worst of it is they’re right.”

Some reasons given for building the Newham Trackside Wall:

1) Flood defence
2) Noise barrier
3) To prevent vehicles crashing into the railway
4) To stop people climbing onto or the tracks
5) Visual barrier
6) Vastly huge art canvas – the longest in Europe (!)

How high is it? Its an answer I couldn’t easily find. With some persistence it was found the Victoria Dock Road wall is 2.79 to 2.85 metres (around nine feet in height) and the bit along North Woolwich/Albert Road 3.55 metres maximum (eleven feet six inches approx.)

Even tho I was sitting (not standing) on the upper deck the wall looked a damn good height from the bus! Its on this section near the North Woolwich portal I found the highest bit – around 3.86m (12′ 8″)

Surely the section towards North Woolwich looks far higher than the data given? Observe the red London buses running alongside – or ride on their upper decks – and compare the wall. These buses are fourteen feet six inches high, and the top of the wall’s not that far off. Someone’s gotta measure the wall! That someone was me!

It seems Crossrail measures its walls differently. Mine were done from the road surface as that’s the total visual height. I found the taller bits to be about 3.65 metres (twelve feet or so above road level.) The biggest however was 3.86 metres (twelve feet eight inches) thus visually the wall is almost thirteen feet high. Quite a nasty height and somehow prisons come to mind…

I dont think train passengers will be able to see anything out the windows except a concrete wall. They’ll think to themselves ‘its that rather dodgy bit in East London where walls have had to be built to keep out the locals.’

Even the section by Silvertown footbridge manages to be over three metres (almost ten feet) high.

Not a very good impression is it? This country does its utmost to shut out railways and this is a hugely gross example. The same railway just a few miles away runs along Montisfort Road in Abbey Wood with nothing more than a wooden fence of moderate height. The previous electric railway through Silvertown simply had a low profile wire mesh fence that did no one any harm.

Originally the walls were not meant to be so tall because the tracks were to descend eastwards from Silvertown into a cut and cover section leading to the tunnel portals. As built, the track is level before climbing towards North Woolwich and then dramatically descending into the tunnels.

Some will assert the railway is absolutely level. Fair enough. I thought the same but was wrong. As the photograph below shows, the line (and wall too) most definitely climb eastwards. It is thus clear the wall gets to be of extremely gigantic proportions. But it didn’t have to be this way. 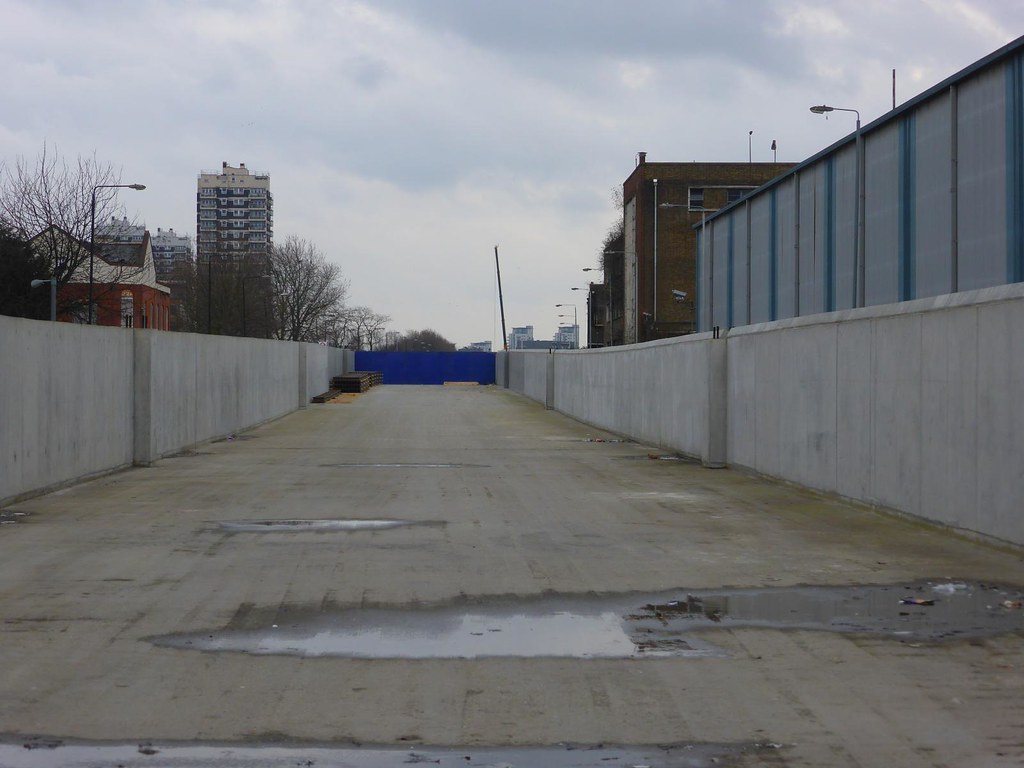 I’m aware the wall doubles as support for the OHLE (cantenary) plus the rise towards North Woolwich was to facilitate proper drainage of the line.
“As part of the original consent, the Trackside Wall had height variations between 2 and 3.5 metres along the length of the wall to meet the agreed safety, flood and acoustic requirements.”

Other assertions as to the actual role of the wall are made. One says: “The plinth, or base, consists of a continuous monolithic wall necessary for protection from vehicle collisions…”

“Albert Road… will be characterized by a very large wall… These elements create a significant barrier between north and south and do not contribute positively to what is essentially a residential area to the north.” Letter to Crossrail dated 1st Feb 2011 and available under Newham 10/02566/AOD.
North Woolwich/Albert Roads are currently described as “fairly hostile environment for all except car and bus traffic.” Wonder what it is that’s making the area feel such? (Source: Royal Docks Infrastructure Plan 2016)

One of the attempts to make the wall more friendly has been the initiatives to encourage artwork upon it.

Originally the walls were to be rendered with suitable materials. That’s been dropped….

Crossrail now deems its best to encourage local people to create arts initiatives along the wall. The locals say they’ve constantly been treated as outsiders and simply been ridden roughshod by the Crossrail authorities.

Some of the current artwork on the wall at Silvertown.

Crossrail says: “We have always intended to apply some kind of a finish to the trackside wall and understand the need to involve the community fully in the process. By asking the artists to engage with local people, our aim is to commission a large-scale, inspiring piece of public art that will genuinely feel a part of the local community.”

The Newham Recorder details the initiatives to brighten up the Trackside Wall.

Previous attempt to brighten up Silvertown’s wall before its completion. Source: Facebook (Link no longer works)

A handful of works so far adorn the wall. Its now well over a year since anything serious’s been mentioned on the subject. There have been adverts from the council alongside the wall urging people to submit any ideas by March 2018 as previous attempts upon the wall were strongly objected to.

Another example of the wall art. This is between Custom House and Prince Regent.

There are some questions re flooding and the defence capabilities of these huge walls. At Silvertown there’s a huge gap along Factory Road, a service access road so to say. No wall here at all. On the other, a massive wall – is it to keep the locals out? Suppose the Thames takes a breach and floods this part of London, as it has done before, there’s nothing to stop it getting down the Connaught tunnel or even through to Woolwich. Whatever have they put walls here for?

Silvertown. Huge wall on the side the locals live. Nowt on the other nearer the Thames. Funny aint it?

Conversely at Custom House the same applies. On the roadway side where the locals live its a massive wall. On the side sandwiched next to the Docklands railway, a much smaller wall that only extends part way. Nothing to stop water from the nearby rivers finding its way through the area’s various declivities and drains into the tunnels….

Mighty big wall for the locals. Nothing much this side. On Crossrail plans its labelled a flood defence wall!

Having said this it seems to me the wall has several gaps and height inconsistency which seem self-defeating when one regards the flood defence. I know I’m a numpty when it comes to a lot of things, yet in my view it seems to me that enhanced flood defences around the area designed to protect both local residents and the railway would have been a better bet. And these could have fitted sensitively into the environment. No need then for these gargantuan walls that are a huge blot.

If I had my way, everyone would be able to sit and enjoy watching the trains go by, and give the drivers a friendly wave. Some would even be inspired to take up a career on the railway. That’s a good community initiative. On top of that a new Silvertown station could have been built, which would improve the locals’ lives enormously (remember they had to endure years of constant Crossrail construction.) Instead the trains are going to be whizzing through non stop. The new Elizabeth Line is shutting out local communities.